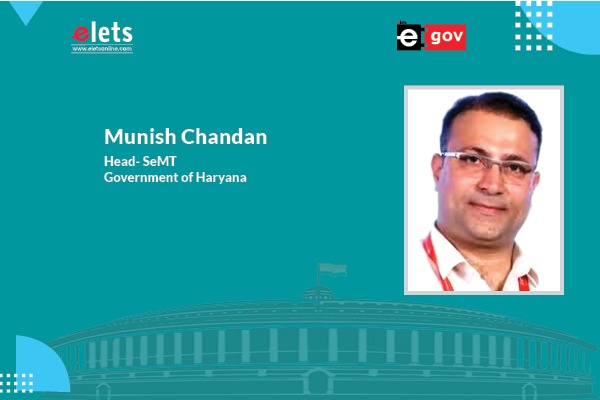 “Data management is a challenge, not technology adoption”

As governments go digital, the need to build capacity in government infrastructure and resources becomes imperative. The role of the State eGov Mission Team (SeMT) is to make government services accessible to the common man and to ensure the efficiency, transparency and reliability of these services. Elaborating on the role of SeMT in the context of Haryana, Munish Chandan, Head- SeMT, Government of Haryana addressed the Elets Digital Governance Summit, Haryana Edition.

The State e-Gov Mission Team (SeMT) is an integral part of the state and the team is from the Government of India. It works to realize the vision of cashless, paperless, faceless and secure governance.

Sharing how the perception of the Haryana government has changed for its internal teams, Chandan said, “Over the last couple of years, the state government’s confidence in the internal teams has increased tremendously. We were able to generate work, build capacity to strengthen internal application development teams and then deploy. So it was an end-to-end delivery, from conceptualization to deployment. »

Regarding confidence, the government is already working to strengthen the teams. The SeMT works as an advisor, consultant and makes efforts to support development parties. With the support of other organizations including the National Informatics Center (NIC), the internal capabilities are so great that Haryana is far ahead of many other states in the country. The most important part is that the Chief Minister of Haryana is also managing the IT portfolio and he is deeply interested in implementing the technology. Therefore, he cares about the smallest details.

Speaking about the challenges faced with the adoption of technology, Chandan pointed out that with increased use of IT tools, more data is generated. Hence, the government faces a great challenge in data mining, data extraction with the right kind of metadata, and data storage. “We are taking steps to improve these aspects. As data storage needs continue to grow and with the limited capacity of data centers, storage issues have arisen. However, we have measures in place to address the issue and increase capacity,” he added. The technology is not difficult to manage, but managing the huge loads of data collected while using the technology is a tall order.

Smart cameras, installed as part of smart city initiatives, are capable of detecting overcrowding, fires and many other similar scenarios. Data transmitted by these cameras is routed to the Integrated Command and Control Center (ICCC) and analyzed to retrieve actionable inputs, he added.

Sharing a brief on the state’s cybersecurity preparedness, he said, the state government has also set up an information and security management office and this office assists all departments, councils, etc. of the State for security assessment requirements and audit related requirements.

Why Debt Consolidation May Be a Better Choice Than Debt Settlement