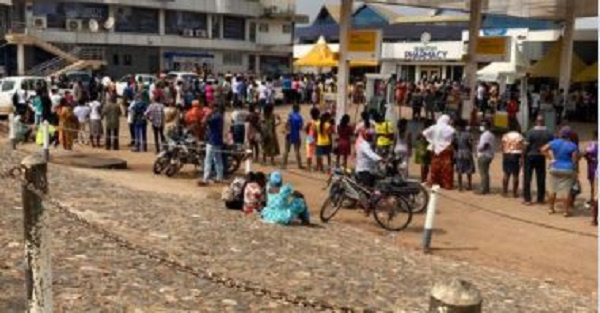 The ongoing SIM re-registration exercise is likely to be in limbo after the National Identification Authority (NIA) raised questions about the quality of biometric data collected by the National Communications Authority (NCA) at the exercise course.

This was in a letter from the NIA dated September 13, 2021 titled RE: SIM Registration Exercise – Biometric Identity Verification via NCA Android Registration Application.

The letter, signed by the Executive Secretary of the NIA, Professor Kenneth Agyemang Attafuah, was in response to another letter dated September 3, 2021, seeking to confirm whether the NCA’s biometrics for SIM card re-registration were valid. format and high enough quality for successful verification against the national identification system.

In response to the investigation, the NIA explained that the design and development of the process by which the NCA – acting by itself or through a third party – will collect and store biometric data from SIM cardholders are exclusive to the NCA, and that the NIA did not participate in the development of the Android registration application.

“For this reason, the NIA is unable to confirm that the biometric data to be collected by the NCA for the purposes described above will meet the standard for successful verification against the National Security System database. identification (NIS),” Professor Attafuah explained.

Under Regulation 7 of the National Identity Register Regulations, 2012 (L.1. 2111), the NIA is required to verify the identity of all persons seeking to engage in transactions requiring identity verification .

To this end, the NIA has entered into a public-private partnership agreement with Messrs. Identity Management Systems II Limited (IMS II), its technical partner, to develop and manage a state-of-the-art biometric verification system platform that guarantees the highest security and meets the highest international standards for use by all user agencies to confirm the identity of their customers in transactions requiring proof of identity.

The said verification platform has been duly developed by IMS II in collaboration with NIA and works efficiently.

Again, by Regulation 9 of L.1.2111, the NIA may by “a notice published in the Official Gazette specify the types of instruments approved by the Authority as portable identification card readers…”

As a result, the NIA has stated that it “cannot endorse or guarantee the quality of biometrics to be captured by the NCA (during the SIM card registration exercise) with devices that the NIA has not not duly certified”.

Exclusive prerogative of the NIA

The ongoing SIM re-registration commenced in October 2021 and is expected to last six months, allowing sufficient space and time for SIM card owners to obtain their Ghanaian cards to facilitate the re-registration process. The exercise, however, was met with undue delays and long queues at SIM registration centers across the country, as the NCA mandated telecom operators to collect another set of biometrics at using an Android app.

According to the NIA, verification of the identity of SIM cardholders against the National Identity Register (NIR) is the sole prerogative of the NIA and cannot be performed by a third party for and on behalf of the NIA.

Although under the plan, the NIA has said it is aware it will play a role in the SIM card registration process, exact details of that role and its associated cost have not yet been released. agreed and entered into between the NCA and the NIA. Instead, the NIA has informed telcos that the SIM card verification fee is GH¢40.50.

The NIA has provided carriers with four (4) options for identity verification against the National Identity System database as follows:

1. USSD and then mass verification of PIN codes and numbers provided by SIM card holders during the SIM card registration exercise

2. Online Biometrics Verification – The online verification process uses a desktop application that verifies an individual’s identity within the NIS

Offline Biometric Verification using NIA Approved Device – To ensure results after verification and in accordance with Fees and Charges Instrument 2019, Ghana card reading devices must be duly authorized and certified by the NIA through a documented process. Devices to be used by NCA for any offline verification service will need to be tested and certified by NIA and IMS II to confirm their technical suitability and ability to read Ghana maps. This is essential to the NIA’s legal obligation to maintain the accuracy, integrity and reliability of the NIS database and the Ghana Card.

IMS II has also ordered 100,000 of these prescribed devices, some of which are currently being used successfully by other user agencies for verification services.

Mobile App – This is an Android Selfie app that will perform SIM card registration and identity verification of SIM card holders in one step and refer back to Telecom companies and NCA in one step a one-step verification code and an agreed data set from the NIA that is guaranteed by the NIA to be accurate and reliable.

However, “the use of an application that is not developed or certified by the NIA to read the Ghana Card using a two-step data collection and verification process is beyond the control of the NIA. NIA n is therefore unable to guarantee the results of such a process.

There will be chaos in the ID ecosystem if an entity can develop its own application to read the Ghana Card and declare the resulting verification return as an official return for and on behalf of the NIA. Rather, it should be emphasized that the NIA cannot defend disputes and lawsuits arising from these reading and verification processes,” the authority said.